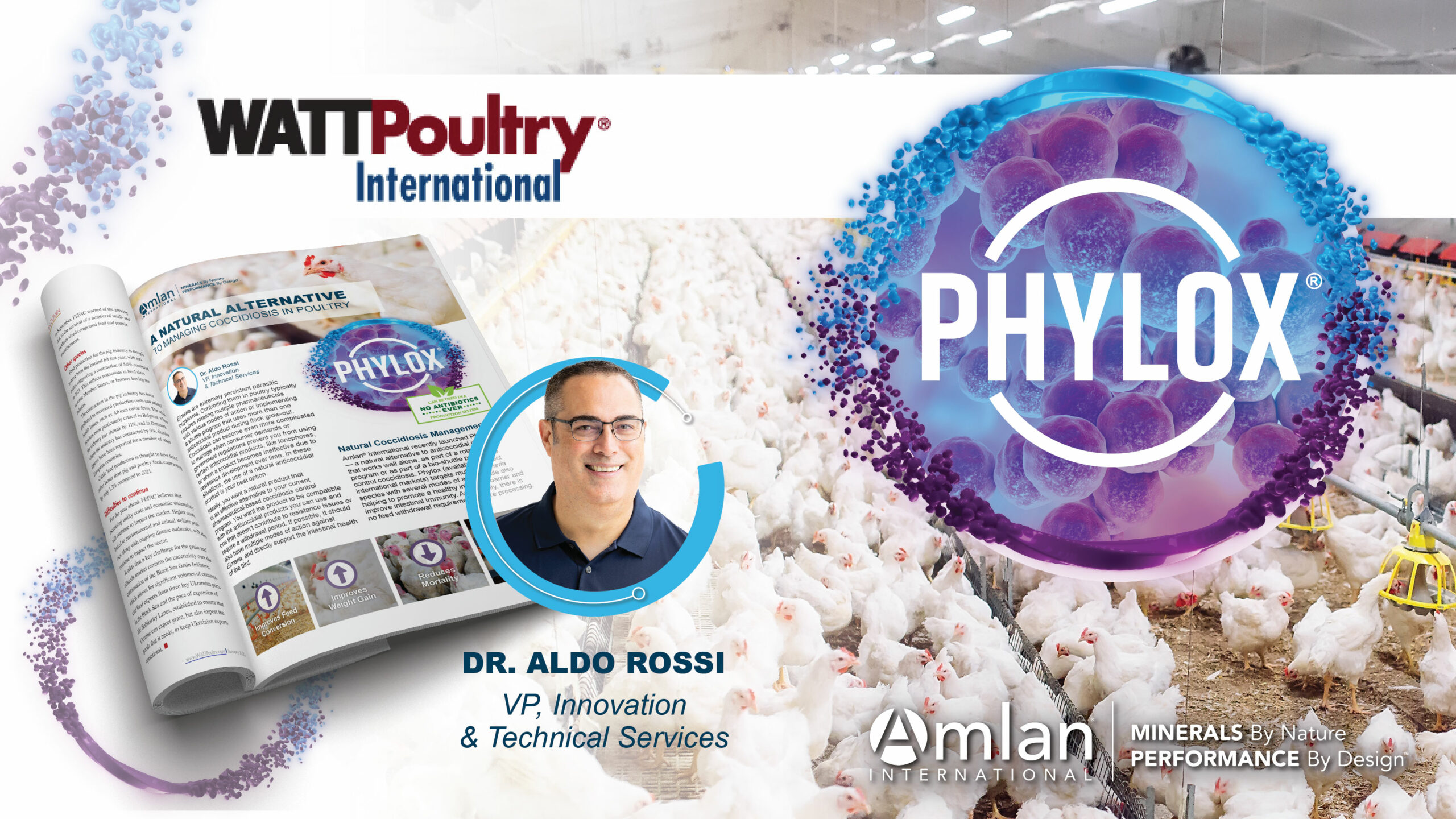 WATT Poultry® International has published an article on Amlan’s newly launched product, Phylox®, available in select international countries. Phylox is a natural alternative to anticoccidial drugs that works well alone, as part of a rotation program, or as part of a bio-shuttle program to control coccidiosis. The natural ingredients of Phylox targets multiple Eimeria species with several modes of action, while also promoting a healthy intestinal barrier and optimizing intestinal immunity for improved production economics. Follow the link to learn more. 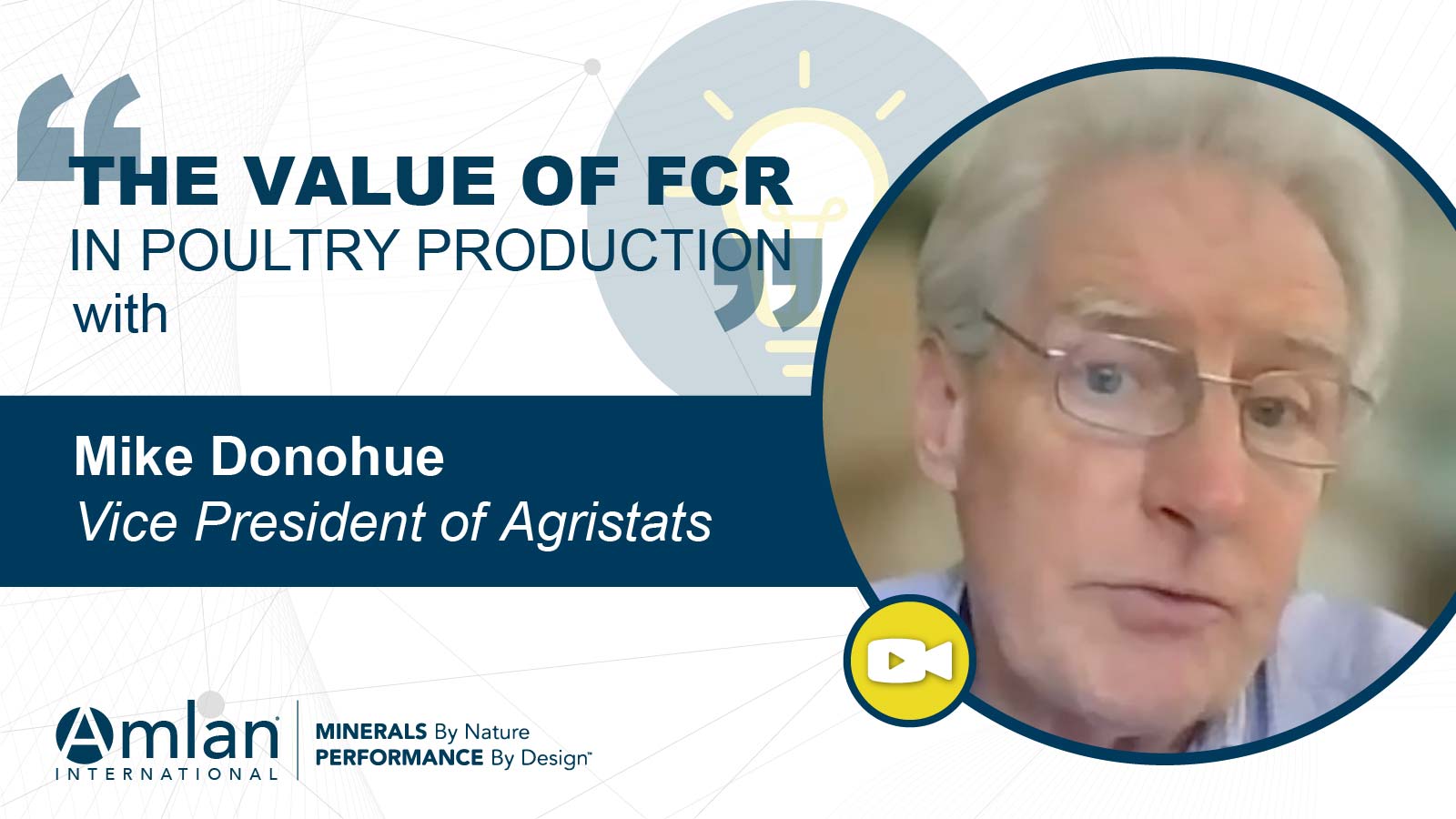 In May 2022, we spoke with Mike Donohue, Vice President for Agristats, about how small improvements in the health and performance of broilers can make a significant impact on the economics of poultry production. Mike is a 42-year veteran of the chicken industry and recently celebrated his 25th anniversary with Agristats.

An Industry Responsive to Consumer Demands

To start our conversation, we asked Mike to describe the evolution of the chicken industry, both in the U.S. and globally. “The growth of the chicken industry over the last 35 to 40 years, not just in the United States, but around the world, has been almost explosive,” he said. “China didn’t have anything really until 1980 or so when they started commercial chicken production, and they’ve grown to, I believe, the third largest producer in the world. Brazil is a similar situation; they’ve grown in both domestic demand and international demand. And the U.S. production has probably doubled in the last 15 to 20 years.”

The U.S. industry has also seen shifts in the products they produce, to better cater to consumers who are looking for easy-to-prepare, nutritious protein — at a good price. “We’ve been leaders, the chicken industry, in bringing affordable protein to people, not just in the U.S. but in pretty much every other corner of the world. You can see that by any statistic from the government or others on per capita chicken consumption.”

Healthy birds are needed to supply the millions of tons of chicken meat to consumers, so we asked Mike about the importance of maintaining bird health and the impact bird health has on production. He stressed that all chicken producers are concerned about being good caretakers of their birds, by providing good husbandry and trying to mitigate disease and environmental challenges.

Keeping birds healthy allows for better production performance and livability. Mike explained that livability is an important factor for producers and provided the example below on what 1% improvement in livability can do for revenue.

“How do we get a balanced diet, at the most accessible cost, that helps birds grow quickly and efficiently and live well, all the way through the life of that flock? That’s part of what I work on; that’s part of what the industry works on day after day.”

Investing in the 1% Improvement

If birds aren’t healthy, they don’t convert feed as well, and that’s an added cost to producers. Mike explained that if you can change something in your production setting (e.g., an alternative feed ingredient) that improves bird health — even if it’s an added cost — it typically means a better feed conversion ratio (FCR), which can make a big difference to revenue. But you need to make sure your return on investment makes sense. In the video below, Mike outlines an example of how adding an extra cost that improves FCR by 1% could definitely be worthwhile.

A large part of Mike’s job is helping his customers find the 1% they can change — the poultry industry works with some big numbers, so small changes can add up quickly. In this way, Mike and Amlan have similar goals — we want to help our customers make changes to their operation that improve their bottom line. Our range of natural mineral-based feed additives help support optimal bird intestinal health and productivity, while adding value for producers. Thank you, Mike, for showing us the big impact a small change can make. 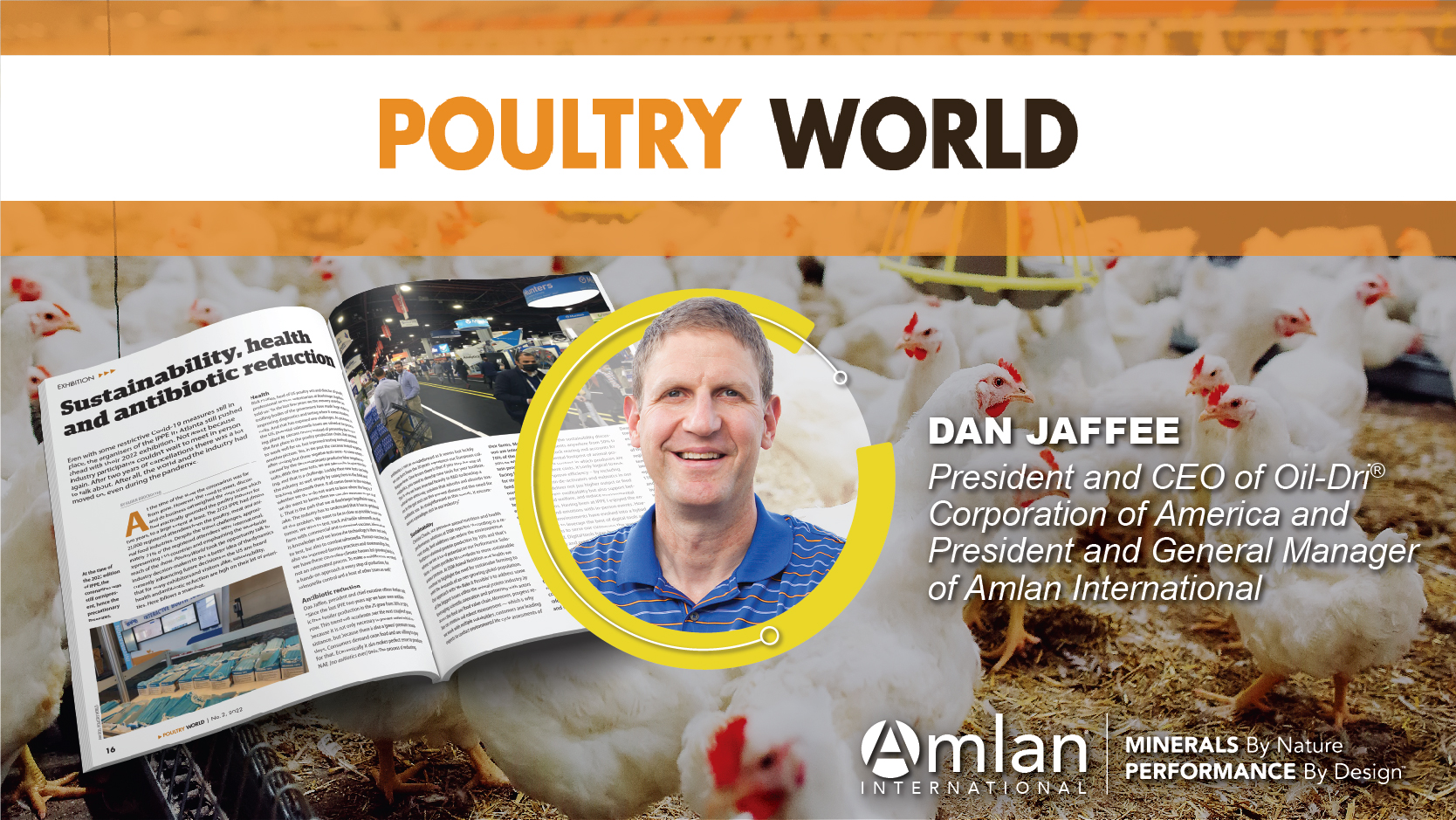 During the 2022 IPPE, Fabian Brockötter, Editor in Chief at Poultry World, spoke with three industry decision-makers about what dynamics are influencing decisions in the U.S. Dan Jaffee, President and CEO of Oil-Dri® Corporation of America and President and General Manager of Amlan International, spoke with Fabian about the increasing trend of antibiotic-free production and the need for natural non-antibiotic solutions.

In part 2 of our Q&A with Dr. Wade Robey, VP Marketing and Product Development, we ask Wade about sustainability and what that means to Amlan. He discusses how Amlan products naturally and synergistically work with the animal’s gut and are made without pharmaceuticals or harsh chemicals. 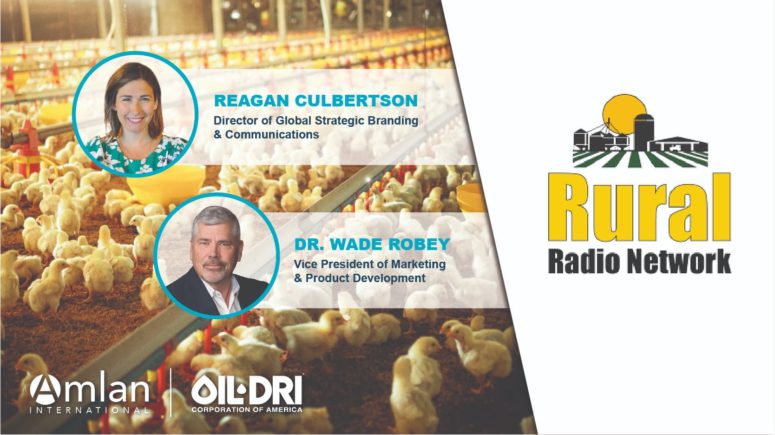 Oil-Dri® Corporation of America launched their first mineral-based product in 1941, and since then the range of unique minerals mined and processed by Oil-Dri have been used for many applications across diverse industries, including animal health. In an interview with Susan Littlefield from Rural Radio Network/KRVN, Amlan teammates Reagan Culbertson, Director of Strategic Branding and Communications, and Dr. Wade Robey, VP of Marketing and Product Development, discuss the history of the mineral technology that is the core of Amlan products. They also describe how Amlan’s mineral-based feed additives optimize gut health in poultry and livestock and improve production economics.

Listen to the interview here.

“Increasing regulation and strong consumer demand are creating a growing market for natural animal protein production solutions,” commented Dr. Wade Robey, our VP of Marketing and Product Development, in a recent interview with Amie Simpson from Brownfield Ag News. Wade also discussed Amlan’s introduction of natural mineral-based feed additives into the US market and the growth opportunities this presents for Amlan in 2022. Read more here. 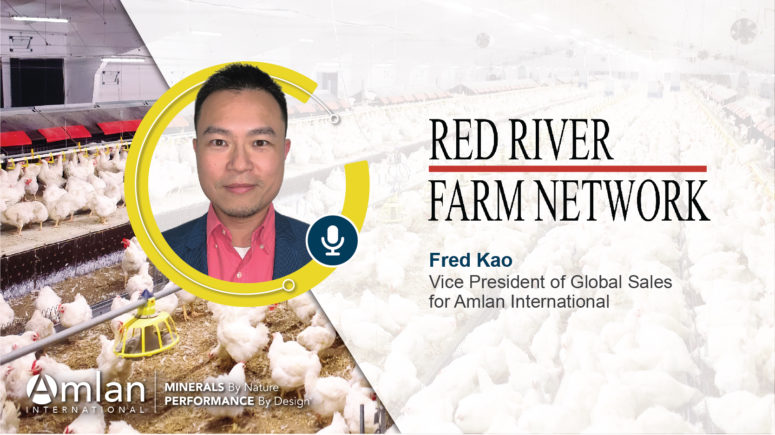 An increasing market sector around the world. That’s the prediction for the no-antibiotic-ever market provided by Fred Kao, Vice President of Global Sales for Amlan, during his recent interview with Red River Farm Network. Fred also discussed the competitiveness of Amlan’s mineral as a stand-alone product. Read the full story here. 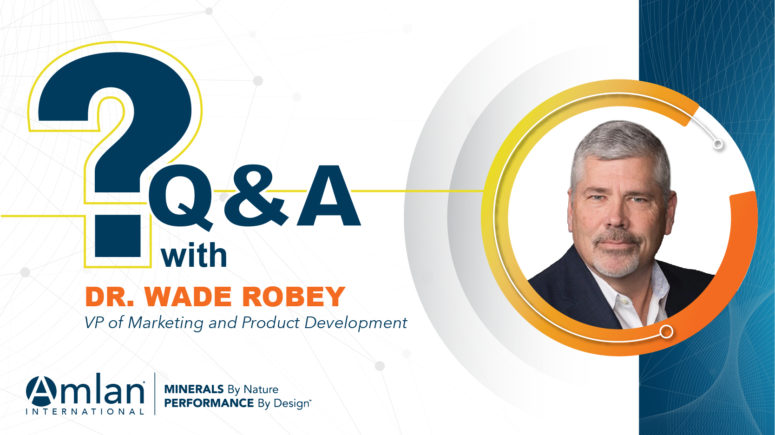 Meet Dr. Wade Robey, VP Marketing and Product Development, as he answers questions about Amlan, the industry and the science behind our products. In this short video, Wade discusses how Amlan’s mineral technology meets the needs of global poultry and livestock producers and their consumers while stressing the importance of a natural approach to this demand.

As the animal health business of Oil-Dri® Corporation of America, Amlan International shares more than Oil-Dri’s millions of tons of mineral reserves — we also share Oil-Dri’s values and ethics. As the Amlan business continues to rapidly grow, so does our team of talented professionals focused on providing mineral-based solutions for our customers — while maintaining their strong ethical values.

The Family Values of Oil-Dri

Nick Jaffee, the grandfather of the current Oil-Dri President and CEO Dan Jaffee, founded Oil-Dri in 1941 with the very same values we live by today. Oil-Dri’s tight-knit inclusive culture means teammates are more like family than colleagues, which can be credited to Oil-Dri’s focus on integrity, approach and vision.

Respect and Trust Are Key

Amlan employees strive to be positive, honest and open-minded to maintain trust in each other and, more importantly, earn the trust and respect of their customers. As our business continues to expand throughout the world and we welcome more team members to Amlan, we continue to uphold these values.

An example of our growing Oil-Dri and Amlan family is our expanding team in China. We recognize that the animal protein market there is growing rapidly, so we’re meeting this demand with the addition of several team members and an expansion of our logistics operations. Our new teammates and investment in our infrastructure in China will help support our mission of providing excellence in technical and customer service that keeps pace with the increasing animal protein demand in this region.

We have also invested in a secure product supply chain for our customers in China by operating multiple logistics centers. The warehouses are located in Tianjin, which supplies the northeast; Shenzhen in the southeast; and Chongqing, which supplies central and southwest China. The supply hubs allow us to quickly adjust to any shifting product demands within the country.

Continued Growth Around the World

Our team continues to grow in other regions and countries around the world, including Indonesia where a patent was recently issued that protects the novel, mineral-based formulation used in Amlan’s existing natural feed additives, Varium® for poultry and NeoPrime® for swine (not available for sale in the U.S.). With the world’s fourth-largest population, the expansion of Indonesia’s sales and technical service team, together with the patent issuance, allows us to better support Indonesian producers, helping them to achieve their production goals and meet the demand for high-quality animal protein.

Oil-Dri’s core values were passed down to Dan Jaffee from his grandfather and father, and Dan strives to instill these values in all Oil-Dri employees, including the Amlan team. As we continue to grow, we know that our relationships with our customers will prosper too, due to our strong belief in these core values.

During IPPE 2022 in Atlanta, Georgia, Sarah Muirhead from Feedstuffs 365 spoke with Amlan leadership about global poultry production trends and the background of Amlan’s natural mineral-based products. During the discussion, Dan Jaffee, President and CEO, Oil-Dri Corporation of America and President and General Manager of Amlan International, described the history of Amlan and the origin of the mineral that is the core of Amlan products.

Other discussion topics included global trends Fred Kao, VP of Global Sales, is observing in the poultry industry. Fred spoke about the increase in antibiotic-free poultry production in Brazil as producers adjust to new EU export requirements and the impact that African Swine Fever has had on poultry product demand in Asia.

Dr. Wade Robey, VP Global Marketing and Product Development, also detailed the benefits of two new Amlan products that were launched at IPPE (International products, not for sale in the US). One product is intended for application in antibiotic-free broiler production when pathogens are decreasing bird performance or when producers are trying to reduce pathogen levels entering the processing plant (NeutraPath®), and the other is a natural alternative to anticoccidial drugs and vaccines (Phylox®) for full time use or in a shuttle program when resistance to traditional coccidiostats is a concern.  Both products also have excellent application potential in broiler breeders which are often challenged with coccidiosis and which can be very sensitive to mycotoxins and bacterial pathogens during grow-out and egg production.