Mycotoxin-contaminated feed is a constant challenge for poultry producers, made worse if environmental conditions favor the rapid growth of mycotoxin-producing fungi in the field or during storage. And if multiple mycotoxins have contaminated the feed, it can create a synergistic, or additive, effect, amplifying each mycotoxin’s negative outcome on poultry production.

Mitigating the effects of mycotoxin-contaminated feed is essential, because whether the effects on poultry are mild (due to long-term low-level exposure) or severe (from a high-level challenge), a decrease in performance (and profits) is usually inevitable. To diminish the effects of mycotoxicosis, poultry diets often include feed additives that target mycotoxins. Examples of these feed additives include Calibrin®-Z (our mineral-based biotoxin binder), yeast cell wall preparations, enzyme-based products and algae-based additives.

Unlike other mineral-based products, Calibrin-Z undergoes specifically tailored, proprietary thermal processing that promotes the binding of a broad spectrum of biotoxins, including polar and nonpolar mycotoxins. Calibrin-Z also binds bacterial exotoxins and endotoxins, such as those produced by Clostridium perfringens and Escherichia coli, to help combat enteric disease.

To evaluate the performance of products marketed to mitigate mycotoxin-contaminated feed, researchers at the University of Missouri (Columbia, MO) evaluated the ability of commercial feed additives to reduce the combined toxic effects of concurrent aflatoxin B1 and fumonisin B1 exposure in poultry. In the 21-day feeding trial, 144 broiler chicks were randomly assigned to six treatment groups with 24 birds in each group (Table 1). Statistical significance for treatment comparisons was set at P < 0.10. 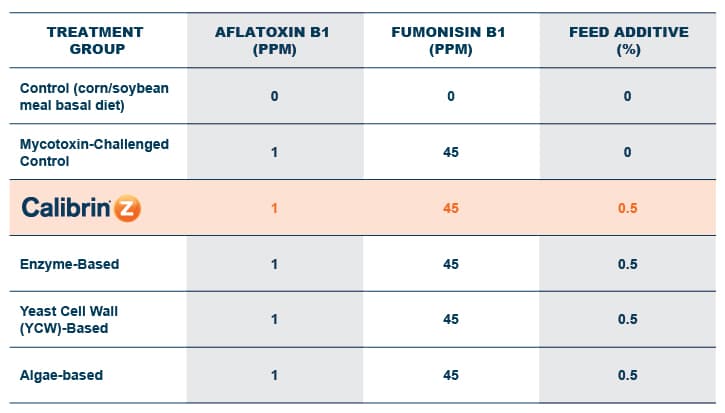 Feeding Calibrin-Z to mycotoxin-challenged broilers improved feed conversion by up to 10 points compared to diets supplemented with enzyme, yeast cell wall or algae-based products (Figure 2).  While not a statistical difference in this trial, these results represent a significant numerical difference in broiler production.

This study showed that adding Calibrin-Z to aflatoxin- and fumonisin-contaminated feed enabled broiler chickens to maintain weight gain and feed conversion similar to birds fed a mycotoxin-free diet. The other commercial products did not improve bird performance to the same extent as Calibrin-Z in this study, demonstrating the production advantage Calibrin-Z delivers by binding multiple biotoxins and improving intestinal tract health. For more information on this study, or on the health and productivity benefits of adding Calibrin‑Z to your birds’ rations, contact us.