Weaning is a stressful time for piglets and can have negative impacts on their intestinal environment, overall health and production performance. Multiple studies have shown that improving intestinal health and function with NeoPrime® can help reduce the negative fallback effects of weaning. But what about other times in the pig’s life? Can improving the intestinal health of sows, gilts or pre-weaned piglets with NeoPrime supplementation improve their performance and health?

Here are three case studies that demonstrate the positive effects NeoPrime can have on the fecal microbiota, nursery swine performance, piglet mortality as well as sow and gilt performance and health. These factors help producers drive profits naturally by increasing potential revenue and decreasing the cost of production.

Researchers at a university in Mexico investigated the effects of NeoPrime on select fecal microbial populations when NeoPrime was supplemented both pre- and post-weaning (0 to 56 days-of-age). Sixteen litters of newborn piglets with similar body weight were assigned to either NeoPrime or control treatment groups. Piglets in the NeoPrime group (eight litters) were given two oral doses of NeoPrime (300 mg) in water, the first immediately after birth and the second two hours after consuming colostrum. The same piglets were offered NeoPrime-supplemented creep feed (0.15% w/w) from day 7 until weaning on day 21. The eight control litters received isovolumic sham (water) doses with identical scheduling as the NeoPrime group and were offered non-supplemented creep feed. Previous data showed NeoPrime improved growth performance and decreased diarrhea when fed at weaning. This prompted researchers to administer NeoPrime at birth, using oral doses to ensure that all piglets received a similar initial dose, an off-label use of the product.

At weaning, 100 piglets were distributed to 10 pens/treatment and 5 pigs/pen. Piglets remained in their assigned treatment groups from day 0 to 56. Fecal samples were collected at 21, 35 and 56 days of age to assess fecal populations of Escherichia coli, Lactobacillus spp., and Clostridium perfringens.

Weaning had an overall effect on the fecal microbiota (regardless of treatment), with the abundance of E. coli and Lactobacillus spp. post-weaning (sampled d 35 and d 56) higher (P < 0.05) than during the pre-weaning phase (sampled day 21). Conversely, C. perfringens abundance post-weaning was lower (P <0.05) than the pre-weaning phase (Figure 1).

There was an interactive effect between treatment and growth phase on E. coli and Lactobacillus spp. abundance. NeoPrime significantly reduced the abundance of E. coli compared to the control pre-weaning on day 21 (P < 0.05) and increased (P < 0.05) the Lactobacillus spp. population on day 56 compared to the control (Figure 2). Piglets supplemented with NeoPrime also showed an improvement in weight gain on days 35 and 56 (P = 0.09).

In this study, weaning had a striking effect on the fecal bacterial populations measured. NeoPrime supplementation decreased the negative effects of weaning on performance, which may be partially due to a beneficial modulatory effect on the gut microbiota that promoted beneficial bacteria.

Benefits of Supplementing Gestation and Farrowing Diets with NeoPrime

A commercial swine farm in Querétaro, Mexico, assessed the benefits of adding NeoPrime to sow gestation and lactation diets (2,400 sows). The farm was experiencing losses from influenza, PRRS and enterotoxigenic E. coli at the time of the study. NeoPrime was supplemented at a rate of 1.5 kg/MT (no other mycotoxin binders or yeast were added) and the results compared to the prior month.

NeoPrime supplemented at the end of pregnancy increased the number of replacement gilts that farrowed (98 vs. 91/110 gilts) which resulted in a substantial increase in potential revenue (Table 1). NeoPrime supplementation from farrowing to weaning also increased the number of sows weaned in good body condition by 6% and reduced sow mortality by 1.31% (Figure 4). Additionally, in sows supplemented with NeoPrime, piglet mortality decreased by 1% and weaning weight increased by 1.05 kg (Figure 5). Lower mortality reduced the cost per piglet by Mex$43.76 (Mex$437.43 vs. 481.19) which amounted to an annual value of approximately Mex$214,000, when accounting for the piglet number increase and the difference in piglet cost.

In this study, NeoPrime improved sow body condition and reduced mortality, which can lead to fewer non-productive sow days, an improved ovulation rate and less cross-fostering in farrowing. NeoPrime also increased potential revenue by increasing the number of gilts retained and reducing piglet mortality, lowering the cost of production per piglet. 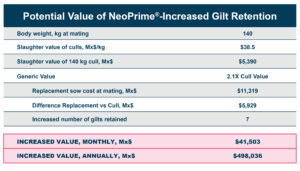 In these case studies, NeoPrime was successful in driving profits naturally for swine producers by increasing revenue potential through reduced mortality, improved performance and reduced cost of production. NeoPrime achieves these effects by reducing the level of pathogenic challenge in the intestine, energizing intestinal epithelial cells and safely stimulating intestinal immunity. To experience the benefits of NeoPrime with your own trial, contact your local Amlan representative.