An Antivirulence Approach to Controlling Bacteria: AGP Alternatives in Development at the Richard M. Jaffee Center for Applied Microbiology 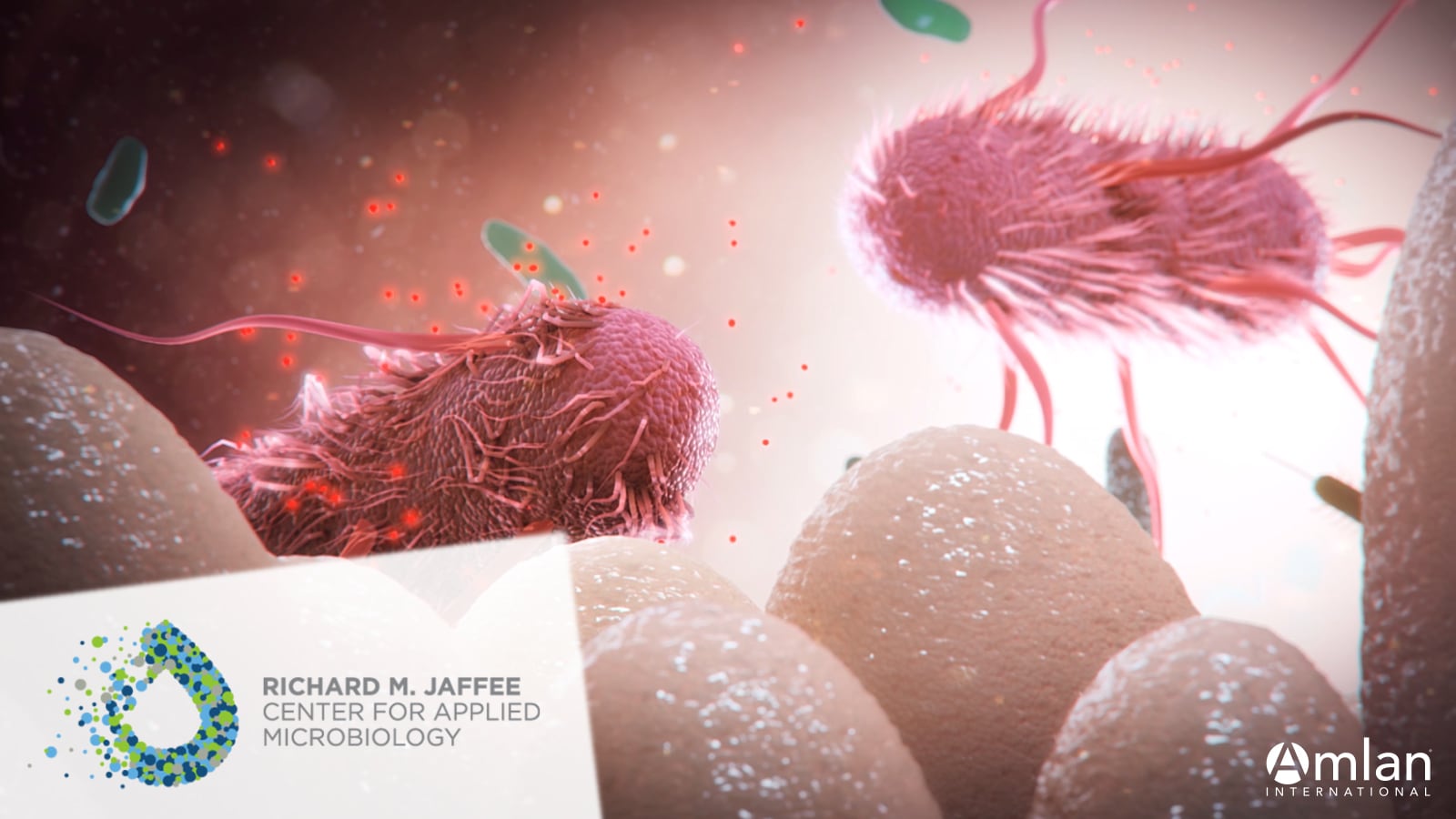 The rise of multi-drug-resistant and mutant bacteria, which don’t respond to antibiotic treatment, is a concerning trend across the world. With the use of antibiotic growth promoters (AGPs) restricted in an increasing number of countries, livestock and poultry industries are looking for antibiotic-free alternatives that keep animals and birds healthy and productive. Amlan International’s Richard M. Jaffee Center for Applied Microbiology is developing industry-leading technology that helps livestock and poultry producers achieve peak antibiotic-free-performance.

Discovering new methods to combat the prevalence of resistant and mutant pathogens is just one of the topics scientists at the Richard M. Jaffee Center for Applied Microbiology are investigating. The research team at Amlan’s new state-of-the-art lab are using an antivirulence approach to control pathogens, which has also been a research focus for developing new antimicrobial drugs for humans.

Unlike conventional antibiotics, antivirulence approach targets bacterial virulence factors and is aimed at disarming pathogens and modifying their behaviors by making them less harmful (less virulent) to the host. The likelihood for multi-drug-resistant and mutant bacteria is much less using this approach.

Previous research at Amlan International showed exciting promise in the quorum sensing area. The Richard M. Jaffee Center for Applied Microbiology continues to conduct quorum sensing research as one component of the overall antivirulence approach to improving livestock and poultry health and production.

Quorum sensing is a communication system between bacterial cells that allows bacteria to regulate their activity in response to stimuli. This communication system involves bacteria releasing biochemicals into the environment which accumulate in the surrounding area until reaching a critical threshold concentration1. The biochemicals then bind to receptors on the bacteria, signaling gene expression.

Quorum sensing can control many functions in bacteria2 including:

Quorum quenching is an approach which can disrupt the quorum sensing system of pathogenic bacteria, preventing cell-to-cell communication and the expression of virulence genes that could lead to their infection in the host. Quorum quenching products should reduce the chance of antibiotic resistance, since they are modifying bacteria behavior rather than killing them.

Evidence of quorum quenching by Amlan’s Calibrin®‑Z biotoxin control product was published in the Journal of Agricultural and Food Chemistry. The research team at the Richard M. Jaffee Center for Applied Microbiology are continuing to build on these positive results and further quorum sensing research.

The previous study illustrated that in vitro, quorum sensing molecules can be separated out by adsorption or catalytically broken down into small fragments by Calibrin-Z. By reducing the concentration of quorum sensing biochemicals, the products can potentially disrupt the ability of pathogenic bacteria to produce toxins or reduce their virulence, since these functions are controlled through quorum sensing.

Additionally, due to their stronger acidity, greater pore volume and greater surface area, in the same study Calibrin-Z performed better then silica, illite and kaolinite as catalysts/adsorbents in quorum sensing molecule removal.

When incubated with Vibrio harveyi, a bacterium that exhibits bioluminescence controlled via quorum signaling, Calibrin-Z reduced bacterial luminescence by 55% (from the area under the curve; Figure 1). While this demonstrated that interference in quorum sensing occurred, the bacterial numbers were not impacted, indicating the reduction in bioluminescence was achieved through quorum quenching and not by killing bacteria.

Quorum sensing is just one of the virulence factors being investigated by the research team at the Richard M. Jaffee Center for Applied Microbiology. Similarly, the antivirulence approach is just one of the next-gen technologies that is being developed in the lab to maximize livestock and poultry producer’s profits by improving the health and productivity of their flock or herd.

Stay tuned for more information about the innovative research conducted inside the Richard M. Jaffee Center for Applied Microbiology.