To prevent mycotoxicosis, poultry diets are often supplemented with feed additives marketed to reduce the toxic effects of dietary mycotoxins. These feed additives are based on a range of key ingredients, including mineral adsorbents (like our biotoxin binder Calibrin®-Z), yeast cell wall preparations, enzyme-based products and algae-based additives. Researchers at Instituto de Soluções Analíticas Microbiológicas e Tecnológicas (SAMITEC, Santa Maria, Brazil) conducted a comparison of these feed additives to determine the best option for maintaining performance when broilers are challenged with mycotoxin-contaminated feed.

In a 21-day feeding challenge, researchers at SAMITEC evaluated the toxic effects of concurrent aflatoxin and fumonisin exposure in broilers. They also compared the effectiveness of various mycotoxin-targeting products, including Calibrin-Z, in reducing those toxic effects. Calibrin-Z undergoes specifically tailored, proprietary thermal processing that promotes the binding of a broad spectrum of biotoxins, including polar and nonpolar mycotoxins. To further help combat enteric disease, Calibrin-Z also binds bacterial exotoxins and endotoxins, such as those produced by Clostridium perfringens and Escherichia coli.

A total of 540 one-day-old male Cobb 500 broiler chicks were randomly assigned to one of six treatments (Table 1). Each treatment had nine replicates of 10 chicks per pen. The mycotoxin-challenged diet, which was fed to all treatment groups except the unchallenged control, contained aflatoxin B1, B2, G1 and G2 produced by Aspergillus parasiticus, and fumonisin B1 and B2 produced by Fusarium moniliforme. Aflatoxin B1 accounted for 93.8% of the aflatoxin added and fumonisin B1 made up 95.8% of the fumonisin. 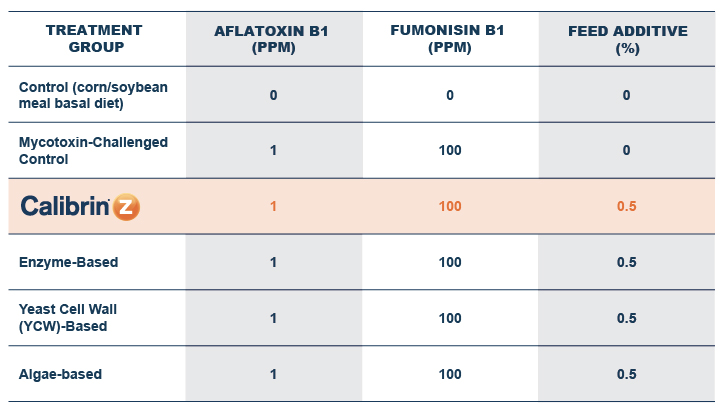 Broilers in the Calibrin-Z group had a feed conversion ratio (FCR) comparable to the unchallenged control group (P > 0.05) and a significantly better FCR than the yeast cell wall-based and algae-based groups (P ≤ 0.05, see Figure 3).

Calibrin-Z has proved, once again, to be an effective mycotoxin binder that improves the performance of broilers fed mycotoxin-contaminated diets. In addition, Calibrin-Z had performance results that were equal to, or better than, other mycotoxin mitigation products in the market. For more information on this study, or to trial Calibrin-Z yourself, contact us.