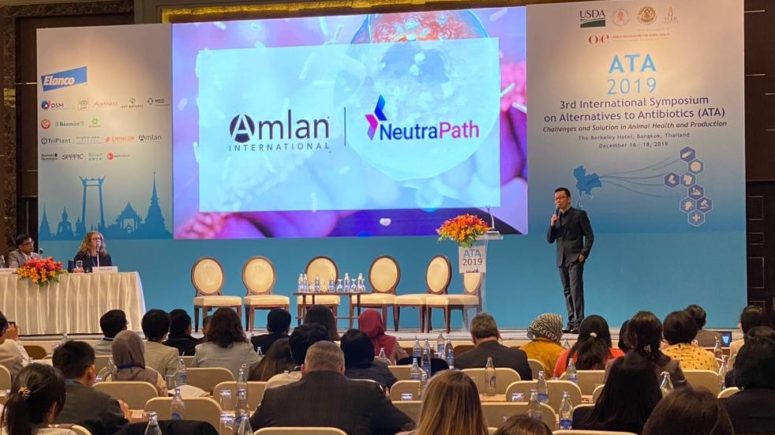 Source: The 3rd International Symposium on Alternatives to Antibiotics (ATA)

Antibiotic resistance in foodborne pathogens such as Salmonella is a major concern for public health safety. The poultry industry is compelled to seek alternative solutions to antibiotics in reducing the incidence of Salmonella colonization in broiler chickens at the farm level. NeutraPath is a formulated feed additive that features a proprietary blend of essential oils, medium-chain fatty acids and an activated toxin-adsorbing mineral. This formula has been shown to neutralize a variety of key virulence factors of pathogenic bacteria in addition to exerting direct bacteriostatic/bacteriocidal effects. This study was aimed to evaluate in vitro and in vivo effects of NeutraPath on Salmonella enterica sv. Typhimurium (ST) infection in broiler chickens.

An in vitro digestion model was used to simulate three gastrointestinal compartments with physiologically relevant pH and enzymatic conditions correspondent to that of crop, proventriculus and intestinal section respectively. In the in vivo trial, one-day old male broiler chicks were randomly allocated to one of three groups (n=30 chickens), i.e., Challenged control with non-treated feed and NeutraPath supplemented at 0.25% and 0.5% in feed. Chickens were orally gavaged with 106 CFU of live ST per chicken at 9-d old. Twenty-four hours post challenge, ceca-cecal tonsils were removed to evaluate Salmonella recovery and serum was collected for FITC-d determination. Differences between treatments were analyzed using one-way ANOVA.

Based on these in vitro and in vivo data, the NeutraPath treatment had the therapeutic potential to reduce ST colonization in broiler chickens and preserve the functional integrity of the intestinal barrier of chickens during ST challenge.