Mycotoxicosis: The Cause and the Natural Solution 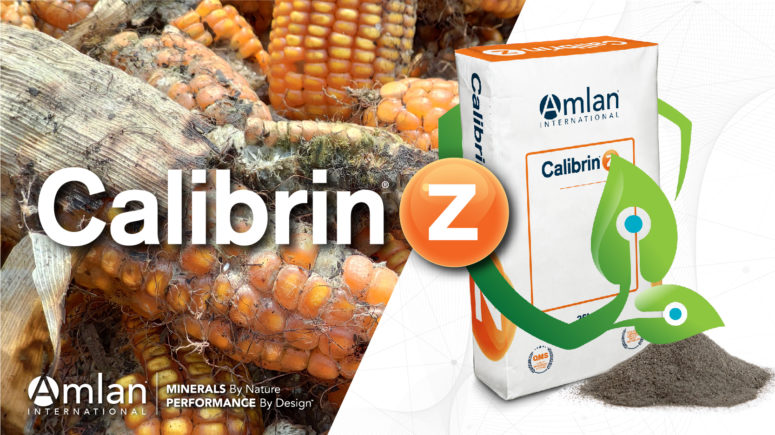 Mycotoxicosis in production animals can range from mild to severe, depending on the animal species, the mycotoxins present, their concentration, the exposure duration, the animal’s health status and environmental factors. When multiple mycotoxins contaminate feed, they create a synergistic or additive effect, which amplifies the negative effects of each mycotoxin.

In most cases, the effects of mycotoxicosis can be insidious, resulting from long-term exposure to low levels of mycotoxins, which eventually leaves animals susceptible to disease. All mycotoxins can cause mortality in severe cases.

The best way to help protect animals from the negative health and production effects of mycotoxicosis is to stop the absorption of mycotoxins in the animal’s gut. All-natural, mineral-based Calibrin®-Z protects poultry and livestock from mycotoxins (and bacterial toxins), ensuring healthier animals, more efficient nutrient absorption, better animal performance, and improved yields.

Calibrin-Z is made from a single-source mineral produced in the USA, providing consistent quality and product traceability. The unique physical and chemical properties of Calibrin-Z, together with Amlan’s proprietary thermal-processing method, promote the binding of multiple biotoxins, including polar and nonpolar mycotoxins. Calibrin-Z also binds multiple bacterial exotoxins (e.g., Shiga-like toxin and NetB toxin) and endotoxins (e.g., LPS). Calibrin-Z is commercially available in select international markets and can be used alone or in combination with product from Amlan’s comprehensive range of feed additives.

Here we summarize the origin of the most significant mycotoxins affecting production animals and the health and costly production losses they can cause.

Aflatoxin is a polar (hydrophilic) mycotoxin produced by Aspergillus flavus and A. parasiticus. There are multiple aflatoxin metabolites, including B1, B2, G1 and G2, with aflatoxin B1 (AFB1) the most potent and frequent cause of aflatoxin toxicity. Aspergillus targets crops like corn, wheat, cereal grains and cottonseed; and under the right temperature and moisture conditions (particularly hot and humid conditions) can produce aflatoxin in the field, during harvest or during storage.

Aflatoxin targets the liver and can cause liver damage and tumors in clinical cases. Sub-clinical cases usually present with reductions in feed intake, weight gain and productivity. More severe cases in poultry and swine can result in gastrointestinal tract dysfunction, immune system suppression or hemorrhaging.

One of the most common mycotoxins in poultry feed, zearalenone is a nonpolar (hydrophobic) mycotoxin produced by Fusarium. Zearalenone is found in crops like corn, barley and wheat and is often produced when temperatures alternate during grain maturation. Deoxynivalenol (DON) is regularly seen in combination with zearalenone in contaminated feed.

Also called vomitoxin, DON is another mycotoxin produced by Fusarium. DON is one of the most common mycotoxins to contaminate crops like wheat, corn and barley. As its alternate name suggests, DON targets the gastrointestinal tract, causing vomiting, feed refusal and diarrhea in swine, all contributing to reduced weight gain and poor feed efficiency. Severe cases can result in organ hemorrhage.

Trichothecene (T-2) and its metabolite HT-2 are produced by certain Fusarium strains in cereal grains. Unlike some of the other mycotoxins, Fusarium produces T-2 under moist and cold conditions (not hot conditions). T-2/HT-2 target the skin and epithelial cells, producing oral lesions that reduce both feed intake and weight gain. These mycotoxins can also suppress immunity and damage the pancreas, liver and heart.

Produced by both Penicillium and Aspergillus, ochratoxin contaminates crops like barley and wheat during storage more often than in the field. Sub-clinical symptoms of ochratoxin contamination include reduced feed intake and weight gain, while clinical signs include immunosuppression, liver damage (fatty liver) and kidney dysfunction, particularly in swine.

Mycotoxicosis can reduce productivity and cause serious health effects, including mortality in severe cases. Mitigate mycotoxicosis with performance enhancing Calibrin-Z — a proven biotoxin binder that optimizes gut health, improves feed efficiency and boosts your bottom line, while meeting the social demands of consumers. For more information on mycotoxicosis or to view Calibrin-Z data from independent third-party trials, contact info@amlan.com.