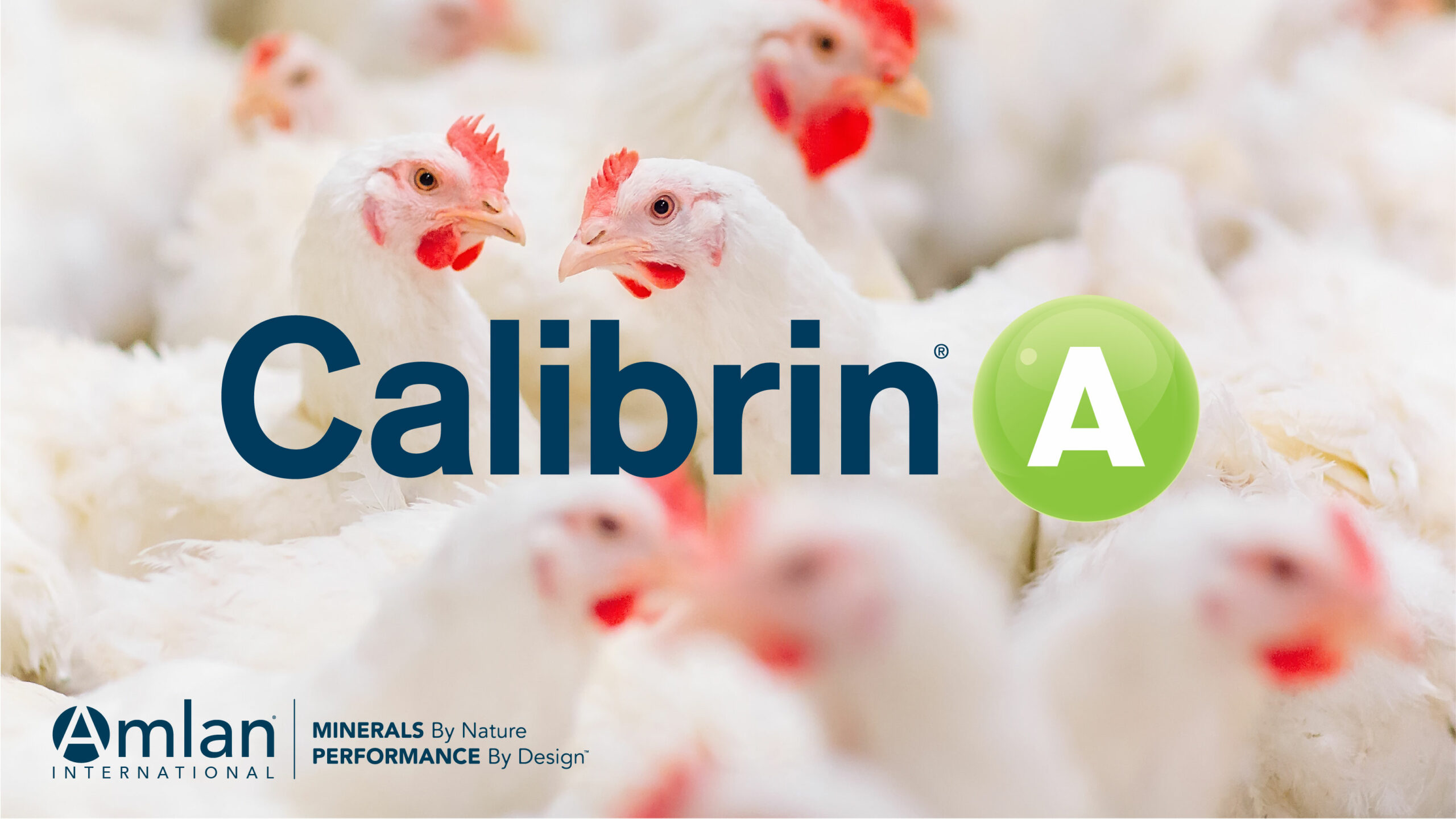 Mitigating the effects of mycotoxin-contaminated feed is a goal of every poultry producer in order to keep birds healthy and reduce the negative effects of mycotoxicosis on performance. Aflatoxin is a common threat to poultry productivity, targeting and damaging the liver and causing mortality in severe cases. Subclinical cases can reduce feed intake, weight gain and efficiency, which negatively impact the cost of production and, ultimately, profits.

Aflatoxin is a polar or hydrophilic (water-loving) mycotoxin, which means it and other polar mycotoxins, like ergotamine, ergovaline and cyclopiazonic acid (CPA), are attracted to hydrophilic surfaces. Calibrin®-A (available in select international markets) is a mineral-based feed additive that rapidly adsorbs these polar mycotoxins due to its hydrophilic binding sites. If mycotoxin diagnostic tests (e.g., BioInsights) detect feed is contaminated with polar mycotoxins, Calibrin-A is an effective solution for reducing performance loss.

Calibrin-A contains one ingredient — our single-source calcium montmorillonite with opal CT lepispheres. We select our calcium montmorillonite from a specific location within our mine to ensure product consistency, quality and reliability for customers. We’re very specific about where we source our mineral, because of its natural physical and chemical properties. We also use proprietary mineral processing methods that are tailored for each product. These unique properties are what create the difference between Calibrin-A and other clay binders in the market. Calibrin-A naturally adsorbs polar mycotoxins and is designed to have a high particle count and increased access to hydrophilic binding sites. The combination of natural mineral characteristics and processing techniques creates a highly effective, fast-acting feed additive for binding polar mycotoxins.

Eliminating the fast uptake of mycotoxins into the digestive system is key to preventing the negative health and performance effects of mycotoxicosis. Mycotoxins quickly metabolize in the intestines and liver and can circulate in the blood for days or weeks. While certain toxins enter the body more quickly than others, the negative effects consistently result in decreased performance and unrealized economic potential. Calibrin-A rapidly adsorbs polar mycotoxins, reducing their bioavailability in the body and mitigating performance loss (Figure 1). 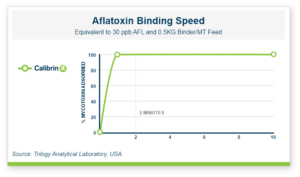 The impact rapid aflatoxin adsorption by Calibrin-A has on bird productivity was shown in two broiler studies. In research conducted at the University of Missouri (Columbia, MO), Calibrin-A abated the detrimental effects of aflatoxin-contaminated feed on broiler health and performance. The study compared a control diet to diets containing 2 ppm of aflatoxin, with or without 0.5% Calibrin-A, fed to day-old Ross 308 chicks for 21 days.

As expected, aflatoxin in the feed caused decreased (P < 0.05) feed intake, weight gain and feed efficiency, and increased (P > 0.05) relative liver weight compared to control birds. The liver is the main target of aflatoxin if it enters the body from the intestine. Aflatoxin will cause the liver to swell and it can become “fatty” with a yellow appearance. The swollen liver and decreased weight gain causes increased relative liver weight.

Adding Calibrin‑A to the diet of birds fed aflatoxin improved weight gain and feed efficiency (Figure 2), and reduced the mycotoxin-induced increase in relative liver weight (Figure 3). Mortality rate of the control and Calibrin-A-fed birds (2.5%) was lower than the aflatoxin-fed birds (10%). 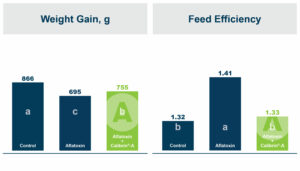 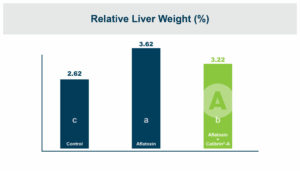 In a study conducted at SAMITEC (Santa Maria, Brazil), four groups of male broiler chicks (6 reps x 10 chicks each) received a diet with or without aflatoxin (2.8 ppm) and with or without 0.5% Calibrin-A (CON, AFL, CON + Calibrin-A, AFL + Calibrin-A). Calibrin-A improved (P < 0.05) the feed intake and body weight of birds fed aflatoxin (Figures 4 and 5) and reduced (P < 0.05) the average liver weight of birds fed aflatoxin (Figure 6). Additionally, adding Calibrin-A to the control diet (no aflatoxin) at 10 times the recommended dose had no negative effects on growth performance (Figures 4 and 5), indicating that Calibrin-A does not significantly interfere with nutrient use. 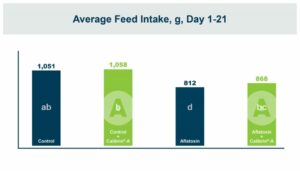 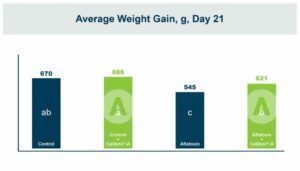 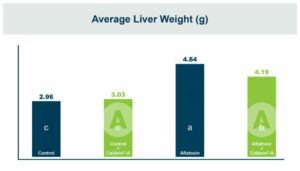 These studies demonstrate the performance and health benefits of feeding Calibrin-A to rapidly adsorb polar mycotoxins like aflatoxin. Single-ingredient, mineral-based Calibrin-A is an effective solution to mitigating the risk of mycotoxicosis from aflatoxin-contaminated feed. To learn more about Calibrin-A or to try Calibrin-A for yourself, contact your local sales representative.